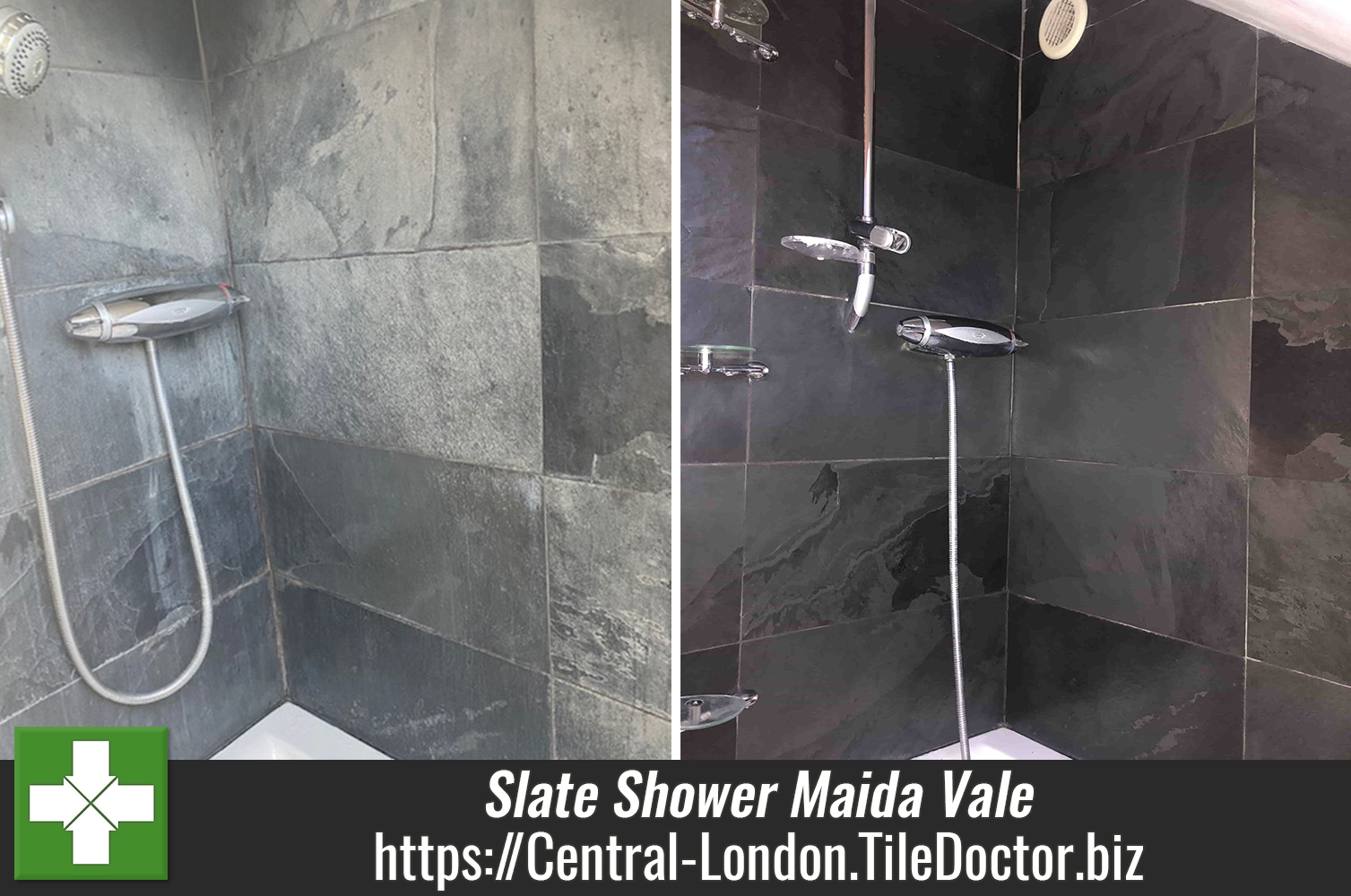 The photographs below are from a bathroom in Maida Vale W9 which had a lovely Slate tiled wall over a bath with shower. Unfortunately, the Slate tiles had been ruined by the use of harsh cleaning chemicals in an attempt to remove the limescale caused by hard water. The slate had now lost all its natural colour and looked completely washed out. The property had recently changed hands and the new owner was keen to have it renovated. 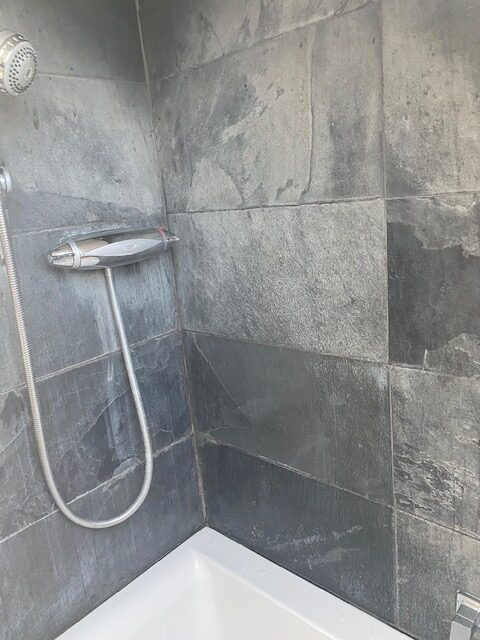 I went over to take a look and work out a solution, this in itself is a lot trickier these days with all the COVID precautions we need to take when working in someone’s house. It was clear that a strong acidic limescale remover had been used on the slate and this had etched the stone, leached all the natural oils away and generally ruined its appearance.

Fortunately, we have a solution for this (see below) and after conducting a small test I was able to confirm the problem could be resolved and gave them a quote which included a day’s labour, abrasive pads, stone oil and sealer. Our quote was gratefully accepted, and we booked a time in to carry out the work.

I returned to the property and I set about burnishing the slate wall tiles using a very coarse 200-grit six-inch burnishing pad fitted to a handheld buffing machine. This process resurfaces the stone slightly to remove the etching caused by the limescale remover. I used a medium dilution of Tile Doctor Grout Clean-up to lubricate the process and to remove the remaining limescale. Once done the slurry that is generated is rinsed off with more water. In a bathroom, it is easy the slurry can just be drained away. In other areas we would use a wet vacuum.

After the 200-grit pad the surface of the Slate was further refined using a 400-grit pad and then an 800-grit pad, this time only using water and giving the stone a thorough rinse after each pad to remove the soil.

The slate was then left to dry off over lunch and given more encouragement with a heat gun afterwards so I could move onto the next step. This involved applying a coat of Tile Doctor Stone Oil which puts back the natural oils back into the stone improving its appearance.

Once the Stone Oil had fully dried, I moved onto sealing for which I applied two coats of Tile Doctor Ultra-Seal; this is penetrating sealer that soaks into the stone to provide maximum stain protection without changing the colour of the stone. It is also an excellent grout sealer which is a bonus. 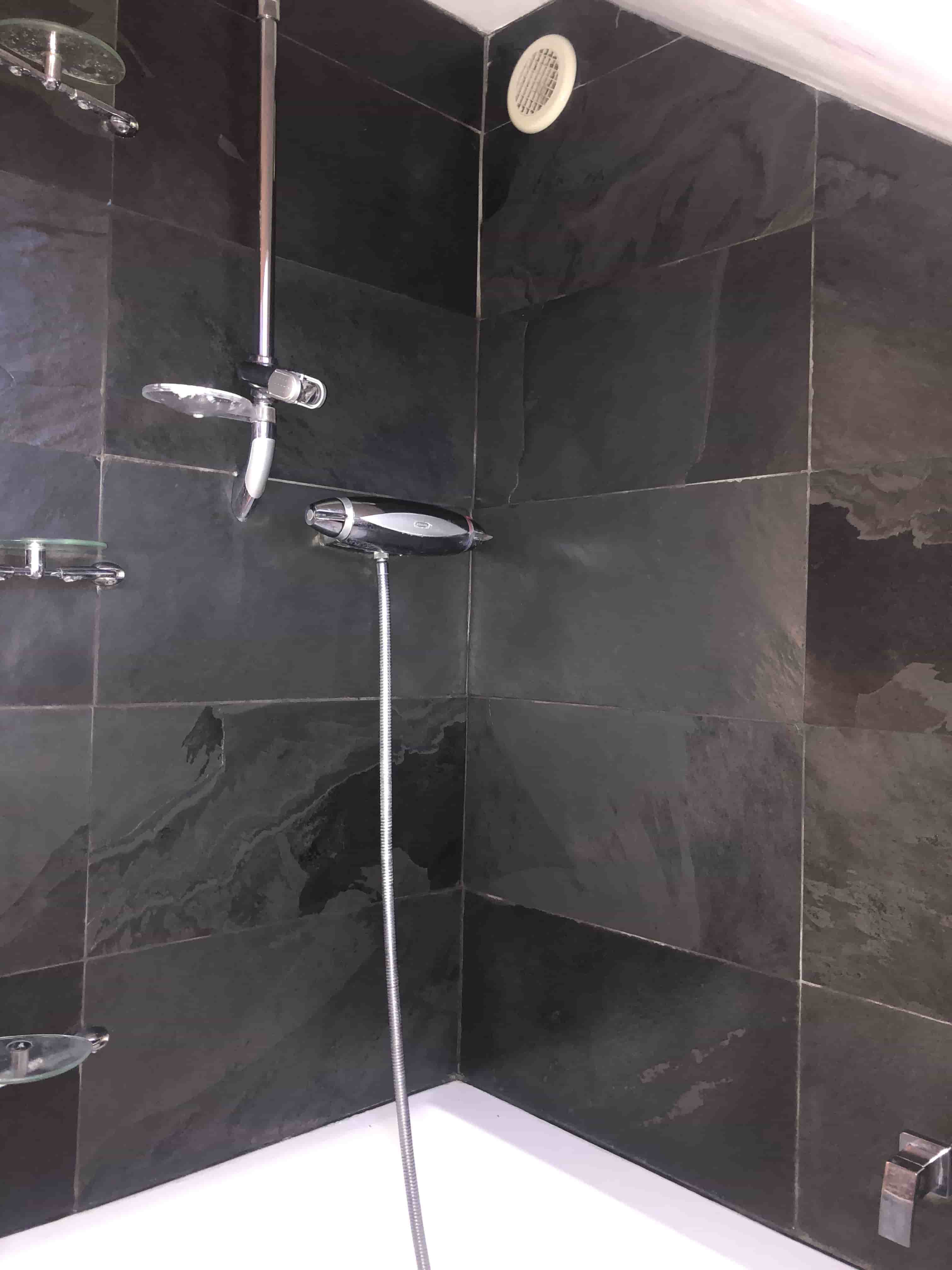 Before leaving I talked the client about how best to maintain the Slate and left them a complimentary bottle of Tile Doctor Aqua Pro tile cleaner which will help keep the limescale at bay. It is gentle enough to use every day but will help prevent the previous build-up and unlike the previous products used will not damage the newly applied sealer.

Professional Restoration of a Slate Tiled Bathroom in Central London 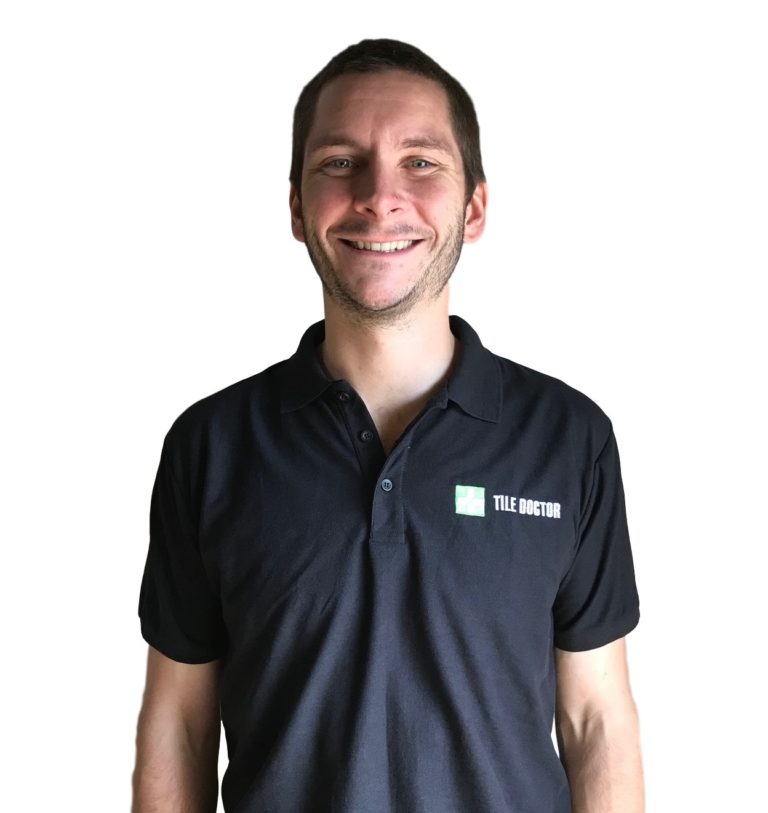 Plenty of problems to solve with my half-finished roof terrace, which were solved cheerfully and carefully.
Gemma M, Hackney

Jackson did an amazing job on our floor, and was super polite and nice. Thanks!
Emma T, London

Jackson and his colleague Andrew were professional, punctual and given the work they were doing clean. They cleaned and sealed a black and white edwardian tiled hall floor, replacing a number of tiles with spares I had and stock they held. They also cleaned and sealed a black white tiles front path, replacing a number of tiles and stabilising tiles that were coming loose. It still looks like a 100+ year old tiled patth and hall, but it is repaired, clean and sealed.
Matthew T, London

Amazing service. Jackson took care in making sure the job was completed to a high standard despite not being able to use the machine which meant cleaning the floor by hand. The tenants are ecstatic with the result. Thank you so much!
Lucy W, Bethnal Green

Jackson was very professional and did an excellent clean. We would have no hesitation in recommending him to others!
Craig H, London